WE ARE CURRENTLY EXPERIENCING A POWER OUTAGE AT OUR HEADQUARTERS. PLEASE CHECK BACK WITH US LATER IF YOU NEED TO SPEAK WITH US. THANK YOU AND SORRY FOR THE INCONVENIENCE.

When a career spans the course of decades within the same organization, people are prone to experience growth, see change, and develop lasting memories. That’s exactly what happened to Greg Davis, Senior Vice President of Hall Logistics. In celebration of Greg’s upcoming retirement, we’re looking back at his 20-year career with The Hall Group.

When Greg began his career at The Hall Group, the company was simply known as Hall Manufacturing – a company that manufactured and distributed Bush-Whacker Rotary Cutters.

“Over my 20 years with the company, I’ve held just two positions. Starting out, I was responsible for sales and marketing for Hall Manufacturing/Bush-Whacker. When Hall Tank was purchased, I was named Vice President of Sales and Marketing for the entire group, which now included both Bush-Whacker and Hall Tank.”

Greg’s career featured many shining moments, but there are two achievements he’s most proud of (although he did say it was hard to narrow down): “The first was on the Bush-Whacker side of the company where I was able to lead our sales team from basically zero dealers to about 170 dealers—a feat that took time, energy and perseverance. The second was a tool I helped develop for Hall Tank that enabled us to provide pricing quotes to our tank customers with speed and efficiently, and that really gave us a leg-up on the competition.”

One of the biggest changes that came in Greg’s career was when Robert Hall offered him a new position as Senior Vice President of Hall Logistics, the position he holds today. “Scary? Yeah, I mean, it was challenging for sure because I knew nothing about logistics, but I took some courses, and allowed myself the freedom of trial and error until I got the hang of it.”

This change in positions is one of the many examples of faith and trust Greg said he has received from the Hall family over his time. Greg’s first interview included Bob Hall and Robert Hall, president of The Hall Group. The trust and honesty he experienced from both Bob and Robert from that day forward are some of the main reasons he decided to stay. “They never made me feel like I was micromanaged; they trusted me to do my job. I would go to them when something was wrong, ask them for advice, and they would say, ‘You know what to do; you just do it.”

This trust and the memories made in the company are what Greg reflects on as he enters the final stretch of his career, especially his time with the late Bob Hall. “Bob was probably one of the most generous and honest people that I have ever known. He would take anybody under his wing and he would do everything that he could to help people. He was a very fun guy. He was a great, great person…I honestly can’t say enough good things about him.”

As Greg gets ready to close this chapter and move onto the next, on behalf of the entire Hall Group, we want to thank him, and congratulate him on a successful career. We appreciate everything he has done for our family and for treating the company like it was his own.

“Not long after I started with the company, I got a piece of mail from a customer and it was addressed to Greg Hall. Robert came to me with the letter, and asked, ‘What is this?’ I joked, ‘Well, I guess they just think I own the place.’”

And that was the whole point to Greg. “They made me feel like I owned the company. That’s just  a good feeling. If you’re trusted with it, and you treat it well…they’ll treat you like you do own the place. And the Halls always did.”

Growing with the Hall Group

Growing With the Hall group Working part-time during college may not seem like a significant step in your career, but for Thomas Gring, it was 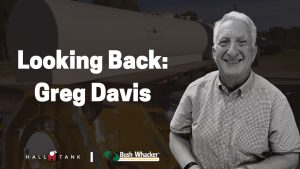 Having been at Hall Tank for over 16 yearsnow, Shop Supervisor Brian Brooks is no stranger to the ins and outs of the tank building process. 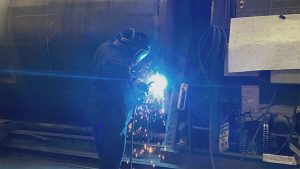 No Step is More Important than Another

Having been at Hall Tank for over 16 yearsnow, Shop Supervisor Brian Brooks is no stranger to the ins and outs of the tank building process. 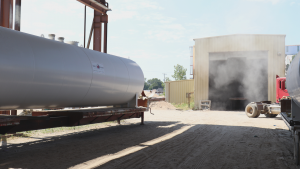 A Reputation for Quality

“Getting it right the first time” –that’s what quality means to Darren Sanderson, who’s been with Hall Tank for over 18 years and once ran their quality control.